Warning: Declaration of Sidebar_Social_Icons_Widget::widget() should be compatible with WP_Widget::widget($args, $instance) in /home/pulpand1/public_html/wp-content/themes/organic_magazine/functions.php on line 478
 Net Fixed : Pulp & Fiber NET FIXED

Posted by Colleen Oldfield on Monday, March 16, 2015 · Leave a Comment

I’m just your average 24 year old female. I live in a downtown Toronto apartment with my best friend and our two dogs, I eat more fast food than I should be allowed to and I write blog posts sometimes. 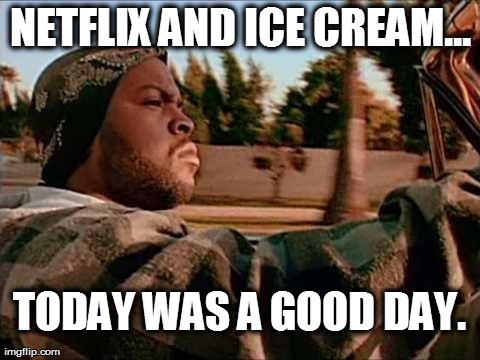 It’s sad but true, I watch Netflix every GD day.  I remember a time when I was little, I would come home after school and fiddle with the antennas (remember those?) on top of the tv until I could find either Digimon or Pokemon (let’s not poke fun). Then there was cable, sweet cable. We’d have millions of channels that our parents would pay an arm and a leg for, but there would never be anything on. And then enters (right curtain, down stage), Netflix, Inc. The almighty provider of on-demand Internet streaming media. Our knight in shining armour. Filled with all the movies and television shows that even the Kings and Queens of binge watching can enjoy, and for only $7.99 might I add. Okay, it seems as though Netflix has hired me to write this, but they didn’t. I promise. Netflix has won the ears, eyes and hearts of millions, 57.4 million to be exact. Here’s ten “did you know that”, and semi revolting facts, about Netflix. (source)

Now we’ve got Netflix’s second cousin, twice removed: Spotify. For a monthly fee of “$9.99 CAD” or “active ads” you can have all the ear milk a human can possibly handle (with a hold on the T Swift). Unlike Netflix though, brands have the opportunity to advertise. With the popular free-mium option, users are not required to pay the $9.99 a month, they are just played some ads from time to time.

And us Canadians have access to ad-free CraveTV™,  currently limited to Bell, Telus, Bell Aliant & Eastlink TV customers, as well as Shomi which is also ad-free and is currently available in limited beta release to Rogers and Shaw Internet or TV customers.

Where does this leave the marketing world?

In 2013, the time spent watching  Netflix increased by 8% , whereas time spent watching traditional TV each week decreased by 3.9% (source). The first decline these services have seen in the recent past (source). With more and more of the population transitioning to paid online streaming services in replacement of their tv subscription, my predictions are that brands:

Have any of thoughts? Leave them in the comments below!

Sorry, no posts matched your criteria.